Hi, I’m Nathan and I write technothrillers with conspiracies and genetically enhanced operatives.

Olesya is a spy hunter.

In a high-tech world of programmed assassins, betrayal and far-reaching conspiracies, Olesya and her team are the last line of defense against a covert organization that will stop at nothing to control the world.

But a new, deadlier enemy is rising.

And they have Olesya in their crosshairs…

You’ll love Helix, because everyone enjoys an action-packed fight for survival.

“I’m completely blown away by this series. 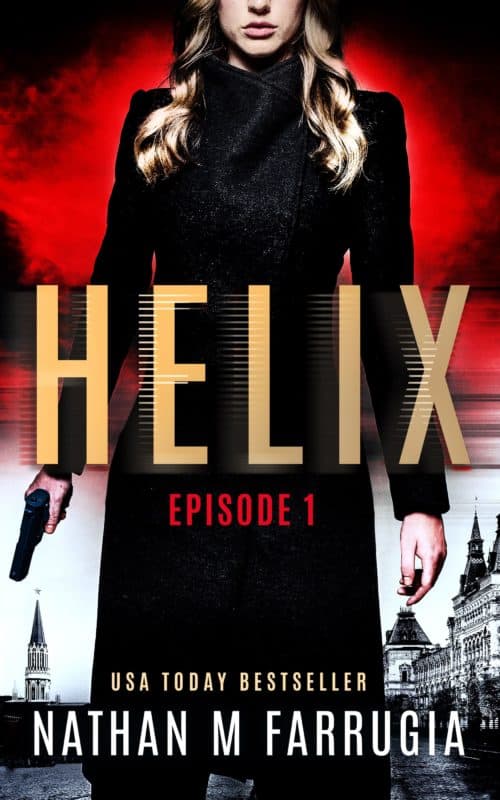 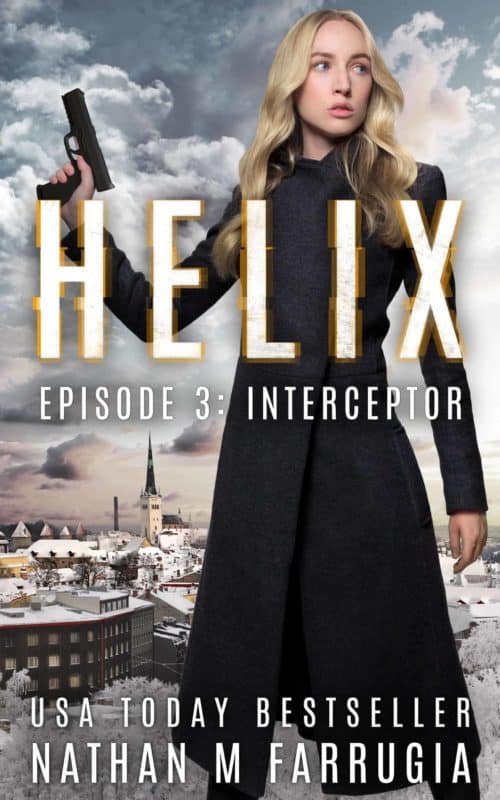 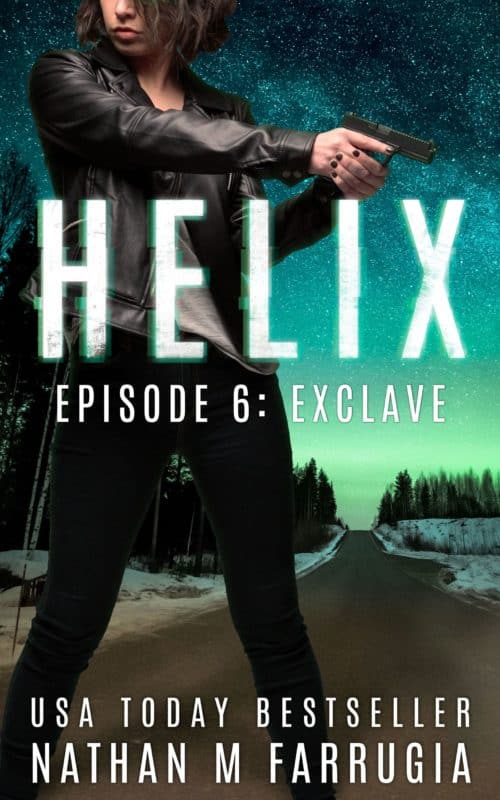 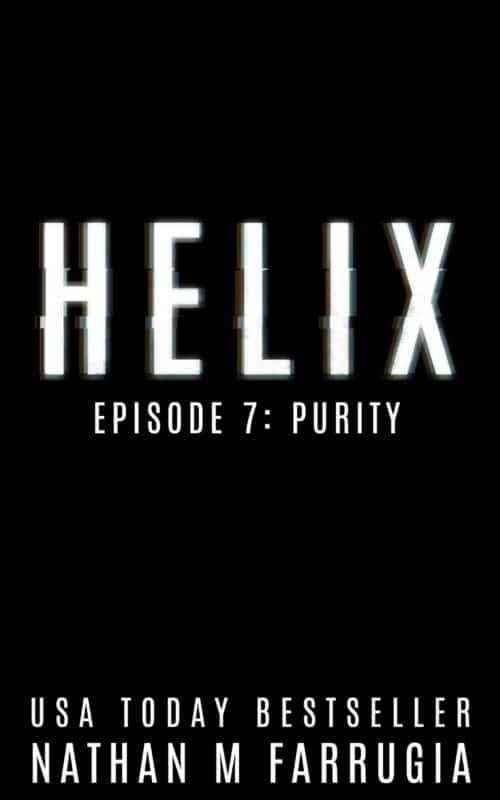 Damien wasn’t meant to be here.

‘Thirty-five minutes and you haven’t asked why you’re in this room,’ the border control officer said.

Damien was sitting in an interview room, although he used the term loosely since his wrists were duct taped to the chair’s plastic armrests, with cable ties fastened over the tape just to be sure. If he had to be honest, this wasn’t quite how he’d planned things.

They weren’t taking chances either. Both his sneakers were missing their shoelaces and there was no partition glass. Just a single camera in the corner, which brought him little comfort.

The officer sat behind a table, directly under a sprinkler head fixed to the ceiling. On the table there was a single sheet of paper, face down. The linoleum floor smelled of ammonia, searing Damien’s nostrils. Vents blew cool air; the room temperature was intentionally cold.

The officer prodded a tablet with an impatient finger. He was American, but his portly midsection pressed against his local Guatemalan uniform.

‘Would you like to know why you’re here?’ he asked.

He held up the paper for Damien to see. It was blank.

But Damien was more interested in the officer’s arm. There was a thin band of white fabric above his right elbow. He’d seen it before, yet couldn’t quite place it.

‘I hope you enjoyed your time in Guatemala.’ The officer’s attention was back on his tablet.

‘Thank you…’ Damien said, reading the surname on his uniform, ‘…Officer White. As far as being pulled off a bus and cavity searched goes, it’s been a real blast. Some people pay for that kind of experience.’

‘And I expect you’ll pay for this,’ White said. ‘One way or another.’

‘I’d prefer a little Shibari myself, but we have to start somewhere,’ Damien said.

White’s left eye twitched. ‘And I know precisely where this will end.’

Damien focused with his enhanced hearing. There was light traffic in the corridor outside, and someone was talking about his possessions in the opposite room. White’s breathing was a bit faster than it should’ve been.

Damien blinked. ‘That’s where I am?’

White looked up from his tablet. ‘I mean on Candy Crush. This level is impossible to beat.’

‘Why did you take me off the bus?’ Damien asked.

‘When the other officers saw my passport, they seemed pretty keen to put me on that bus.’

‘Believe me when I tell you I was doing you a favor.’ White put his tablet down. ‘What matters is where you will go. There are certain gentlemen from a department of the United States government who look forward to meeting you. They should be here soon.’

‘And which department is that?’ Damien asked.

‘Do I look like I should know, or even care?’ White glared at him. ‘Do you know who I am?’

‘I’m crossing off “romantic love interest,”’ Damien said. ‘Or am I not giving us the chance we deserve?’

‘What we deserve?’ He gave Damien a self-assured nod. ‘We deserve to be purged.’

‘I was thinking of doing a detox myself.’

‘Are you scared, Damien?’

He knew the answer. He could die here. Or worse, the government could take him. ‘I’m a little concerned.’

‘You have good reason to,’ White said, his hand on his holster.

Damien felt his skin crawl. Maybe it was the cold air, maybe it was White. ‘What things?’ he asked.

White lifted his hand from the holster and inspected his fingertips. ‘What did you do, exactly? Are you a terrorist, Damien?’

Damien felt his pulse race, a dull throb in his ear. He breathed slowly and focused on the officer. There was still a way out. ‘Why would you believe anything I say?’

White shifted in his seat. His chair squeaked. ‘That depends on what you say. Do you think you’ll survive this?’

Damien resisted the urge to blink. ‘Depends on who’s pulling your strings.’

White’s tablet buzzed. He walked over to check it, then double-check it. His lips shivered into a smile. ‘I have some good news.’

The door opened and a pair of uniformed officers entered. Like White, they didn’t appear to be local. And like White, they both wore white arm bands. One officer closed the door.

Their name tags read Price and Gray. Price had an oddly large head and thick eyebrows that twitched when he drew a fixed-blade knife. It didn’t look government issue, and it didn’t glint under the light because it was coated black.

Gray didn’t reach for her knife, but she kept a hand close to her holstered stun gun. Her glass-green eyes focused on Damien’s body instead of his face. Damien pulled sharply on his restraints, but it did little good. From opposing sides, both officers approached him.

Nathan is known for placing himself in dangerous situations, including climbing rooftops in Russia and being hunted by special forces trackers in the United States. He studies Systema, a little-known martial art and former secret of Russian special forces.

Beyond his army training, Nathan has trained under USMC, SEAL team, Spetsnaz and Defence Intelligence instructors, and the wilderness and tracking skills of the Chiricahua Apache scouts and Australian Aboriginals.

Stay up to date with new releases:

HOW TO ALMOST DIE WHILE WRITING A NOVEL
READ AT JUNKEE.COM